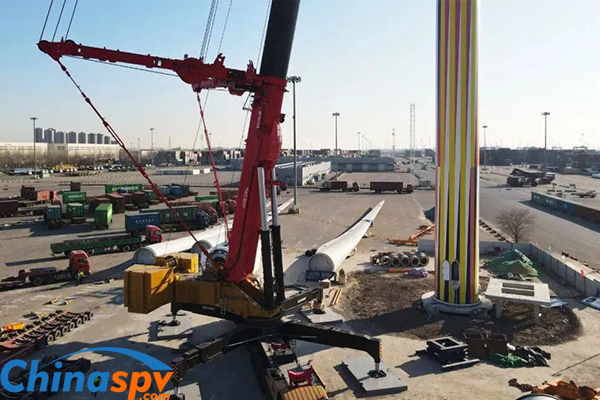 This time, SAC24000T adopts the working conditions of main boom 80m + auxiliary boom 44m, and counterweight 240t, and the cabin weighing 135 tons is firmly placed on the 110-meter-high tower, and then the hub and blades are docked. The whole hoisting process is rigorous and precise. 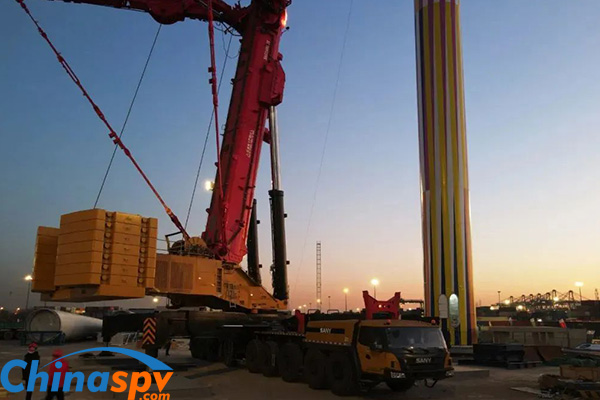 The weather in the port area is unpredictable, and the wind speed has become one of the important factors affecting hoisting. Liu Shengyong, the operator of the SAC24000T, said, "The port is very windy, and it is very difficult to wait for a hoisting outlet. We can only observe and prepare for the battle at any time. Once the right time comes, we will immediately start rushing to install it."

Liu Shengyong said: "The most important thing about wind power hoisting is safety, but the blades hoisted this time are larger, the nacelle is heavier, and the tower is taller. The owner has a rigid requirement for the load rate of the equipment, which must reach 80%. And this vehicle can reach at least 60%.”

In addition to operational performance, the efficiency of the transition is also the focus of the owner's consideration. The SAC24000T directly performs heavy-duty transitions with a full arm and a full leg of 284 tons. The flexibility of the vehicle is greatly shortened. The construction time and the construction efficiency has been greatly improved.